Making sense of all the rising debt chatter

Some journalists have been sounding the rising debt alarm bell. While I’m not worried about current debt levels, I do take solace in the concerns being raised, as there was none of that pre-2008.

What I will attempt to do in this post is to break household debt down for you.  The Federal Reserve Bank of New York’s Center for Microeconomic Data issued its Quarterly Report on Household Debt and Credit in February (see table below.)  They find that total U.S. household debt to be $13.15 trillion at the end of 2017.

Given the fact that the U.S. population has risen 7% since 2008, debt per capita (per person) is actually lower. The culprit of today’s household debt levels is certainly not that consumers are out shopping like it’s 1999! Total credit card debt ($834 billion) is just slightly above where it was in 2008, but again, on a per capita basis, it’s actually lower than in 2008. In fact, in 2008, credit card debt made up 38% of all household debt. Today, it’s just 26%.

No, today’s rising debt levels are primarily the function of these two factors: 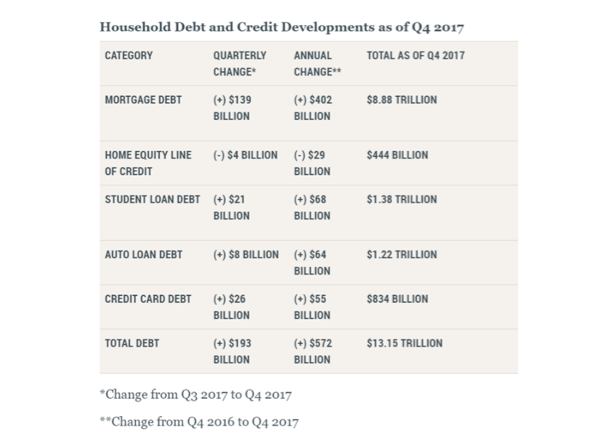 The table below provides a good breakdown of household debt. Yes, debt is on the rise, but so are employment and incomes. Combine that with a continual increase in the overall population and I believe the U.S. household debt levels are not alarming at all.

About the Author: David Weyher